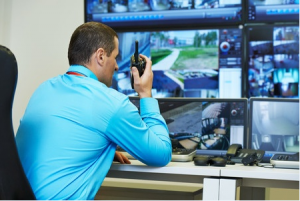 Having security in the workplace is a decision every business owner wrangles with at some point. While everyone thinks “it will never happen to me,” unfortunately it can. Even if you believe your employees are happy and your workplace environment is safe, high-risk situations can arise without a moment’s notice. Whether an employee is secretly upset, leading to workplace violence, or your business becomes the victim of a robbery, it is better to feel safe rather than wonder if it truly could happen to you.

Such unbelievable instances are becoming more and more frequent. In fact, according to the Chicago Tribune, an executive at a company in downtown Chicago shot the CEO of his firm in a dispute over a demotion. This shooting occurred in July 2014 during the middle of the work day, and left the CEO in critical condition while the disgruntled employee shot and killed himself after his attempted murder-suicide. Even worse, several months later, the executive died from the injuries he sustained in the attack. The most disturbing aspect of this workplace violence is that the two involved were longtime colleagues and friends.

Another unsavory incident of workplace violence occurred in Massachusetts in September 2015 when a chef at a P.F. Chang’s restaurant was stabbed to death by a co-worker. According to EHSToday.com, the disgruntled employee grabbed a knife in the restaurant’s kitchen and stabbed the chef in the back during the dinner rush. This unexpected violent episode only furthers proves that high-risk situations can occur at any job at any level at any time.

This unique opportunity allows employees to be prepared for unexpected violence, or helps business owners train their specific candidate for workplace security protection. To learn more about our new training program, call us today at 843-408-4158.